Appreciating someone on twitter who apparently tweeted something about how bad dark theme is for people with astigmatism and I can't see their tweet because they're currently private locked (a friend QTd the original tweet) but can see the replies from relieved people who didn't realise before why they have issues with dark theme when everything says it should be the better option, it's so frustrating that the myth about dark theme being better for your eyes is so prevalent 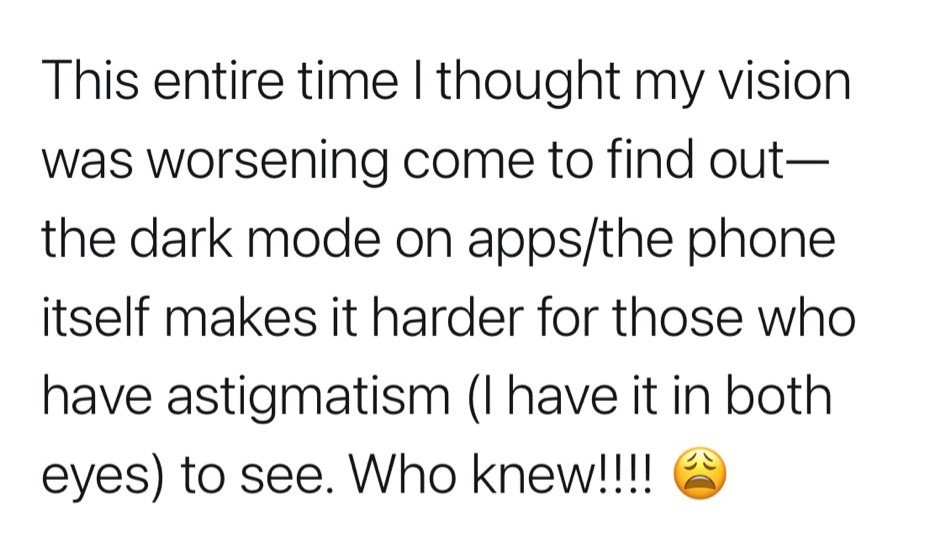 Patrick Georgi patrick
@wolfie Any idea where the "dark themes are better" myth is coming from?

At least German workplace safety regulation prefers "dark letters on bright background" on monitors ("Positiv-Darstellung" is the keyword for that), and that has been consistently the position since the 90s (research backed, but I couldn't find sources quickly)

@patrick no idea but I know a lot of programmers and devs love their dark themes when coding, and I see the "better for your eyes" thing rolled out constantly, like recently Thunderbird and Firefox said that in their update notes when they added dark themes

Patrick Georgi patrick
@wolfie Digging into it a bit, workplace regulations seem to refer to ISO 9241-303 which will probably be referred to in other countries' regulations as well.

I've only found the German version, but a rough translation of section 5.5.3 would be:

Remarks: Most applications should prefer a positive image polarity. The advantages are:

- Reduction of bright-to-dark-adaptation of the eye
- Lower eye strain
- Better readability through improved recognition of characters at the same contrast
- lower perception of unavoidable reflections
- better readability for most older people
- in most cases the display brightness and the ambient brightness of a normally lit room's walls [that is, what you see around the screen] is more similar

Many people with low vision prefer a negative image polarity though.
--

The main thrust seems to be to match the environmental brightness which also explains the "but at 3am!" argument: white-on-black would minimize the difference in an unlit room.

In any case, this ISO standard is something I'll remember to bring up when people claim superiority of dark themes in the future.

@patrick interesting, thanks for looking that up! It's good it recognises accessibility needs while stating the benefits of lighter themes